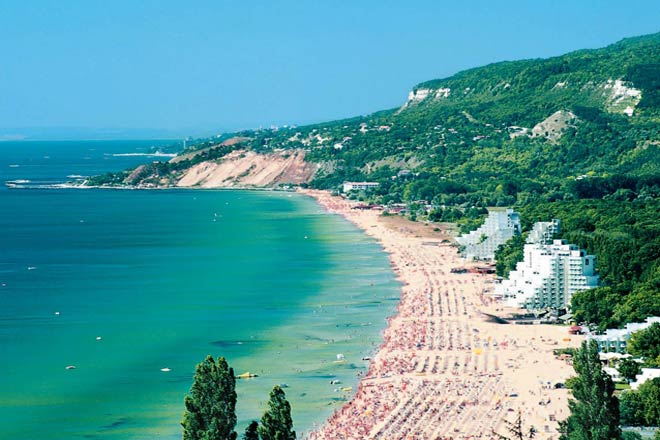 COMPOSITIONAL ASPECTS OF THE TREES AND BUSH VEGETATION IN “ALBENA” RESORT

COMPOSITIONAL ASPECTS OF TREES AND BUSH VEGETATION IN “ALBENA” RESORT

Abstract
The trees and bush vegetation in “Albena” resort can be viewed in two main groups, namely:

This analysis defines relationships and outlines guidance for the future development of the complex. The work is clarifying the structural connections between different types of plantation, the particular public parts of the complex and their functional capacity.

Introduction
The resort of Albena is situated 32 km north of Varna and just 12 km south-west of Balchik. On a long sand stretch in the open northern part of Varna Bay. The resort’s erection was started in 1968, which makes it one of the most modern holiday cities along the Bulgarian coast. The complex lies beneath a relatively high hill and is given particular charm by the nearby forest of Baltata. A part of that forest is declared a protected area.

The latter is also called Batova Gora (Batova Forest) after the Batova river, in the valley of which it grows. The resort’s architecture resembles one of Walter Gropius’ urban models as most of the hotels have a terraced structure aimed at providing as much sun as possible in summer days. To the north the coast is steep, featuring yellow sandstone and limestone typical of the area. It is in fact this stone slope that was the main source of construction material for the resort.

Materials and Methods
Vegetation is a dynamic factor, which varies with mainstream of the time because of its biogenic nature and as a result of human activity. It is susceptible to sudden changes caused by natural or anthropogenic influences. The recreational activities can also lead to undesirable changes in trees and bush vegetation. This warrants a precise analysis of these characteristics that determine the recreational value of park areas and can be affected when these areas are used for recreational purposes.

Literature survey shows that the question of defining the indicators for recreational evaluation of parks is not fully resolved. In most cases they are not related to their trees&bush vegetation. Therefore a lot of conclusions from most general matter were made. For example:

Tandy (1979) recommended different aged and mixed plant volumes as more attractive for tourists. Preference to mixed plant volumes gives Brahe (1987) too. He uses a quantitative measure for recreational assessment of the ornamental trees and bush vegetation – number of trees per unit area.

Deja (1981) does take into account the type and age of decorative plant volumes assessing the suitability of areas for recreation. The classification of different vegetation types is made according to species composition and soil moisture. Priority is given to the evaluation of mixed groups and massifs aged over 60 years and in certain habitats to the highest level of fitness have fallen ornamental trees&bush vegetation aged over 40 years.

Brush (1984) highlights the importance of high grasses and shrub plants. He used the plants as a horizontal limiting the visual intrusion in the areas. It takes two criteria regarding age structure and species diversity of vegetation. Depending on the visual effects in some cases he recommended as more suitable different aged and mixed plant volumes. In other cases – different aged and pure plant volumes.

According to Cooper and Murray (1992) a constructive method for visual evaluation of sites should include a description, analysis and classification of areas to create a structure within which to cover all landscape components. The biggest problem in the development of quantitative methods to evaluate the visual impact by Buhyoff and Riesenmann (1979) is to determine the coefficient of importance of individual landscape components in the overall evaluation.

Unwin (1975) describes three stages in the evaluation of landscape. This are “measurement” of the landscape, formulation of landscape values through the survey of people’s preferences, and finally an evaluation of the visual qualities of the landscape. Most sophisticated models in this regard, he says, are psychophysical which use first psychological impact, and after that objective quantitative and qualitative parameters of the landscape. The creation of such a model requires three sets of data: photos, survey data on people’s preferences to landscape, and landscape parameters.
Results and Discussion
This analysis is based on the vegetation monitoring in the period of 2007–2008 at the “Albena” resort. It is made with the aim of working up a plan for the future planning and development of the trees and bush arrays. The trees and bush vegetation in the “Albena” resort can be viewed in two main groups, namely:

The natural vegetation in the complex forms the local plant volumes. First of all, this is the forest reserve “Baltata”. It is located near the village of Obrochishte and being the southern boundary of the resort. “Baltata” was nominated as a reserve on 20.04.1978 and later on 15.10.1999 it was redeterminated as a sustainable forest reserve. It is part of a dense forest in the north of Bulgaria, situated in the mouth of the Batova river. The arrays inside the complex, mostly on the slope, are also part of the local plant volumes. They are also of a natural origin and their structure is based mostly onto native species.

Landscaping of the surrounding area of the buildings under individual projects holds a substantial part of the complex green areas. Together with the local plant species there are some ornamental plants as plant accents and compositional forms, which are not typical for the Black Sea region.

The latter group – plants for collections and exhibitions – was presented only by the large rosarium, situated close to the promenade at the time of the study.

Conclusions
The general planning and the development concept of the complex provide the construction of many other special places with exotic plants in the future. This are playgrounds with collection of different harmless plant species, sitting areas with cactuses and other exotic tropical vegetation. Also palm trees in pots along the main pedestrian itineraries and major units of the local structural centers by means of the vegetation. The conducted observations reveal clear and logical link between the functional activities of the areas and respectively the intensity and attractiveness of the plantations.
That is illustrated by the two enclosed schemes (Figures 1 and 2): 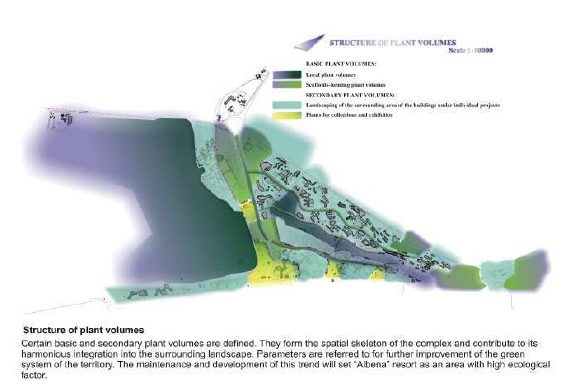 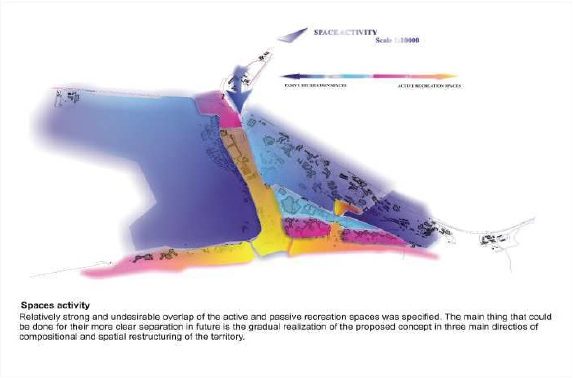 Fig. 2. Spaces activity
This analysis defines relations and outlines guidance for the future development of the complex. The work clarifies the structural connections between the different types of plantation, the particular public parts of the complex and their functional capacity.
Закон за ландшафта е необходим Най-големият парк във Враца е почти готов